Back to all posts

The band currently has a song featured in Both Classic Rock and Prog Rock magazine CD Samplers. The Track "Takin It Easy Now" was produced by Ralph Patlan (White Wizzard,Megadeth,MSG,Brian Head Welch) and can be listened to here: 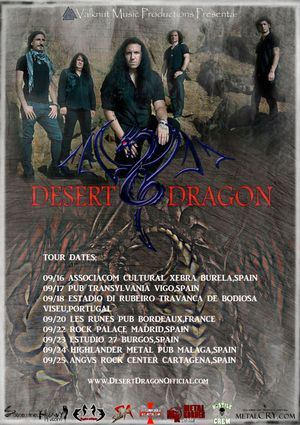 In July 2014 they signed ex-White Wizzard  singer, Joseph Michael (WITHERFALL,MIDNIGHT REIGN,EX-WHITE WIZZARD) as their new lead vocalist. In Aug 2014 the band went into the studio in Los Angeles to mix their new album with James “Jimbo” Barton (Producer/Mixer for QUEENSRŸCHE, RUSH, ERIC CLAPTON, METALLICA). The result is Desert Dragons' most polished release to date "Before The Storm". The band has shifted its focus from Blues to Hard Rock and Psychedelia. This shift has given the band a new direction and they have even revamped some songs from their first album (“Take it Easy Now”, “Save My World”, and “Desert Horizons” ) to give them more hard rock content.

Find out more about Desert Dragon at http://www.DesertDragonOfficial.com